There were a number of women playing hockey with various clubs who were simply not satisfied nor happy playing in their competitions. For some it was a tangible feeling of dissatisfaction playing in teams managed and run by aggressive male coaches. For others, it was a sense of wanting something more from their team; a camaraderie that should have been, but wasn’t experienced. Others loved the game but hated the training regimes and expectations of highly competitive clubs. And then there were women who had had a rich and active hockey history and wanted to play in competition but age was an issue. The vibrant and highly skillful Women’s Veterans competitions that exist today were then still in their infancy.

Hockey embers are easy to flame given the right hockey climate, and so we came to be……..

In 1985, after a busy pre-season’s social networking effort where friends told friends who had hockey friends who told their friends, the Parkville Women’s Hockey Club was conceived and the concept was born; the brainchild of Pauline Cook, Jan Ross and Rhonda Cumberland. Parkville were not affiliated with any other club so chose the State Hockey Centre as home ground and thus the club name of Parkville was handed down by the Association. We were a strong, feminist and political team; many of us older than the average age playing in DC (D Grade Central). And we were very, very excited at having finally found our hockey niche.

Our first season, 1985, was the season we deserved and what a season it was. There was a belief that all things were possible. In keeping with pre-determined philosophy and policy, training was not compulsory and had no bearing on team selection. Yet virtually all full time players attended training regardless, which was run and coordinated efficiently by Parkville’s inaugural Coach, the wonderful Jacquie Mason. Her pre-game motivational instructions were short and simple, “Go out there and score five goals in the first five minutes.” The season was a dream and the final outcome, a dream result. Parkville won the Grand Final defeating Yarra 2-1. We were a premiership team in our first year in the Melbourne Women’s Hockey Association and were promoted to Melbourne League 5.

Our first few years were heady hockey experiences and we rode high on continued successes, competing in two successive qualifying finals and winning the 1988 ML5 Premiership, after which we were promoted to League 4. Unfortunately, we were unable to sustain our greatness. Political and philosophical differences surfaced resulting in some players leaving and we finished the 1989 season on the bottom of the ladder and entered the 1990s lean in numbers and mean on income.

And there were many lean years. Seasons where we barely fielded a team; the several occasions where we almost had to forfeit as we didn’t have the seven required players to begin a game. There were years when our bank balance was in the red; when management and financial accountability was sparse and several players had to use their own monies at the end of a season to ratify our debts to the Association. But in the end, it doesn’t take much to inject a little enthusiasm and spirit into a team that even at its lowest ebb, holds to a concept of inclusiveness, passion and empowerment. More than eleven players is a good start. And they eventually came. Financial stability also helps and this too, was realized. And a new Coach arrived who offered us a little vision, a few good boundaries, a desire to use our skills and a debate about participation in training and fielding the best team. By 1997 Parkville was back with a Premiership flag to show that we were again a force to be reckoned with.

Our rich and colourful history belongs to the 112 women who have played with Parkville over the last 25 years. We have won four premierships (1985, 1988, 1997 & 2001) and have finished in the top 4 of our respective ladder 14 times in our 25 years thus far. We have also been relegated twice and finished on the bottom of the ladder once. We have been fortunate to have 8 different Coaches over the years, all of whom have brought their own style and fervour to the team which was necessary, as Parkville has always been a team of strong and opinionated women. This may well explain why we played without a Coach for eight years!

We were the first women’s hockey team in the competition to wear shorts after successfully lobbying the Melbourne Women’s Hockey Association to change their uniform policy. In 1995 Parkville ran on to the field in their memorable purple shirt and black shorts, the fore-runner of our current uniform.

Outside the Women’s Winter Competition, Parkville has competed in summer competitions over the years. In many memorable games at the Elgar Road ground Parkville took to the field in their Hawaiian shirts. Pity the teams who thought our casual attire reflected our on-field performance. After-game BBQ’s and gatherings further developed our strong reputation as a friendly and social team. We even branched out one summer and played a season of Lacrosse. For the majority of us, one season was enough.

Parkville and friends fielded two teams in the 2002 International Gay Games in Sydney, the Funky Divas and the Vic Strikers. The Vic Strikers won the Silver medal losing to Germany in the final minutes of an enthralling game. Parkville walked in the 2002 Pride March and also participated in the Melbourne Gaymes in Summer 2008, celebrating many of our players’ gay pride and unity.

The Story of Parkville is an ongoing one. Our resilience and determination to survive as a one-team club is inspiring in an Association dominated by strong hockey clubs with multi women’s and men’s team representation. We’re still here and we have more than survived. From year to year we have dealt with some age old issues, namely an ageing team with an average age of 40 something. There are those who would be critical of a team that recruits mature age women but Parkville has always been an inclusive team and one that celebrates women in sport, regardless of age. Our youngest player to date was 20 years of age and our most mature aged player has been 56. Parkville respects and encourages diversity and this I am sure will continue to be.

And Parkville will continue. Some folk measure the success of a team in terms of Premiership flags however Parkville has always been different. Certainly there is the fever to compete and play well and most of the women who have represented Parkville over the years have shared in this will. But there are other indicators of success that perhaps are fairly unique to Parkville. Maintaining and sustaining a one-team club is an achievement. And although we have had a team Coach since 1997, the team has a core of resilient and diverse women who speak their minds and like healthy families, don’t always agree. But players remain with Parkville; current players’ names have been on scorecards since ‘92, ‘93, ‘94, ’95, ’98, ’99 & ‘00. Others are recent arrivals, 2009, and that is the way it should be.

As Parkville launches into its 25th year, there are more differences than similarities between the team of 1985 and 2010, the current bond of women playing in our rather dashing purple and black. The similarities though are louder. There is inclusiveness and passion. And for many, the feeling of empowerment playing a sport they love and with women who matter. This is what makes Parkville unique and a truly legendary women’s hockey club. And that too is how it should be. 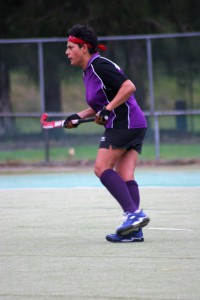